Posted by: I Dream Of Pizza in International, Israel, Reviews July 8, 2011

Over the past few weeks, I’ve written about my recent experiences at two pizza places in Israel: Green Door Pizza Bakery in Jerusalem’s Muslim Quarter (at which an elderly man makes pies from a hole in the ground) and Gusto in Tel Aviv (an upscale pizzeria which serves an array of creative thin crust pies). …

Summary : This neighborhood joint is packed with locals every night of the week. The pizza is nothing exceptional, but tastes better than it looks. And certainly worth checking out for the scene.

Over the past few weeks, I’ve written about my recent experiences at two pizza places in Israel: Green Door Pizza Bakery in Jerusalem’s Muslim Quarter (at which an elderly man makes pies from a hole in the ground) and Gusto in Tel Aviv (an upscale pizzeria which serves an array of creative thin crust pies). The two places couldn’t have been more different from one another. My third and final pizza stop in Israel was somewhere in between the two places — a hole in the wall slice joint in the up and coming Florentine neighborhood of Tel Aviv. Although not quite as hidden as Green Door Pizza Bakery, the spot has no signage outside. Yet everyone in the neighborhood seems to know about it.

Giuseppe Pizza (3 Vital) isn’t the type of place that I would have stumbled upon on my own. But a friend had been raving about the place since my previous trip to Israel in January 2010. So after more than year of hearing about it, I was excited for him to take me there. It was packed with locals around midnight on a Tuesday evening. Many people were grabbing pies to go, as the place only has about a dozen stools. We were able to grab two spots overlooking the oven and pizza making station. Next to the oven there was a soccer game playing on a flat screen TV, which seemed out of place in the no frills joint. 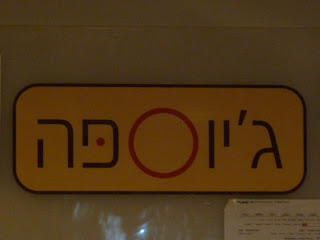 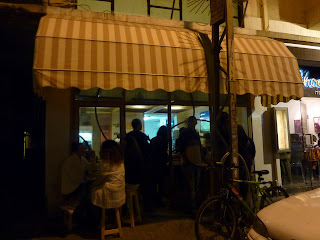 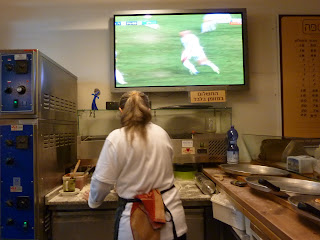 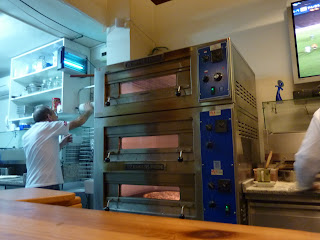 The pizza place serves a variety of slices and you can also order a full pie, as we did. During the hour we spent there, I don’t recall any ordering a Margherita pie or slices. The shop is apparently known for some of it’s more creative concoctions. The pie that we ordered contained two halves: one with broccoli and tomato and the other with spinach and a Hungarian like cheese that resembles feta. By the looks of the pies that were coming out, my expectations had been lowered. The toppings appeared to be uninspiring, and to be honest, the pies just didn’t look that tasty. The dough was being flatted with a rolling pin and the crust looked like it cooked poorly in the pizzeria’s oven.

That being said, I was actually quite impressed with how good the pizza tasted. It didn’t change my life, nor was it the best pizza I’d had in Israel… but for pizza that didn’t look particularly appetizing, it was quite tasty. Perhaps a little oil had something to do with the extra flavor, and the crust wasn’t nearly as tough as I’d anticipated. Considering that most people are probably eating at Giuseppe Pizza after a few drinks (it’s surrounded by bars and lounges) it’s no wonder that the place was so packed. 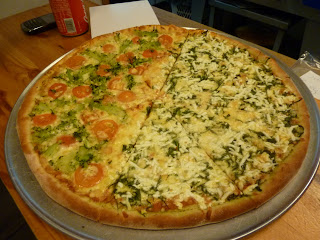 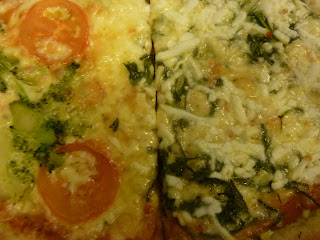 Unfortunately, my Hebrew has gone downhill over the years, so I’m having trouble making out the menu details. They do offer more than a dozen types of pizza and a whole pie will run you between $18 and $25 depending on the exchange rate and what you order. I’ve spent very little time in Tel Aviv’s Florentine neighborhood, and the next time I’m in Israel I’d love to check out some of the nightlife there. And when I do, you can be sure I’ll be stopping back at Giuseppe Pizza for a late night slice. 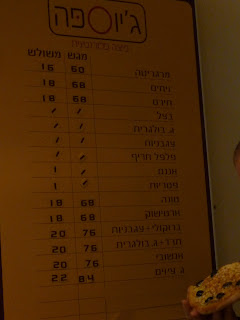 Previous: New York Times: How Not To Make A Pizza
Next: Huff Post Writer Claims World’s Best Pizza Is In… LA?