Posted by: I Dream Of Pizza in International, Israel, Reviews July 1, 2011

During a recent trip to Israel, I had the opportunity to eat pizza at three very different places. Last week, I wrote about my experience at Green Door Pizza Bakery in Jerusalem’s Muslim Quarter, at which an elderly man makes pies from a hole in the ground. The spot — which has no address — …

Summary : This "sceney" pizza place is located across from Rabin Square. The toppings are creative and sitting outside to watch the crowd stroll by makes for a pleasant evening.

During a recent trip to Israel, I had the opportunity to eat pizza at three very different places. Last week, I wrote about my experience at Green Door Pizza Bakery in Jerusalem’s Muslim Quarter, at which an elderly man makes pies from a hole in the ground. The spot — which has no address — looks like it’s been around for hundreds of years.

Although Tel Aviv is just 45 miles north of Jerusalem, the two cities couldn’t be more different than one another. Thus, it’s not surprising that my experience eating pizza in Tel Aviv did not at all resemble that in Jersualem. I had the opportunity to try two pizza places in Tel Aviv, the first of which was an upscale spot called Gusto (90 Frishman Street). The restaurant overlooks Rabin Square (also known as Kikar Rabin) which is the plaza where former Prime Minister Yitzhak Rabin was killed in 1995.

On my last trip to Israel, I’d visited a Tel Aviv pizza place called The Pizza. The Pizza serves Neapolitan style pies while Gusto’s pies have a thinner, more cracker-like crust, but the concept at each spot is the same: a sit-down restaurant with outdoor seating in a hip Tel Aviv neighborhood that serves pricey pies with creative and fresh local ingredients. 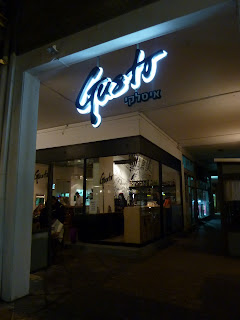 I was taken to Gusto by a friend who claimed I’d be trying some of the best pizza I’d ever eaten (both at Gusto and a second stop). Although it didn’t come close to claiming that title, it was certainly tasty. The creative topping combinations are probably what impressed me most. Although at many pizza places the most simple pie on the menu is listed first, the “classic” pie is at the very bottom of Gusto’s menu. In other words, they don’t mess around.

The menu starts off with a pie featuring sweet potato cubes, roasted peppers zucchini, eggplants, Jerusalem artichoke, and cauliflower. Don’t like that? As you work your way down the menu you’ll find pies like the “Tuna and Asparagus” which also comes with peas, olives, and red onions. Or the “Goose and Sweet Potato” pie which also comes with asparagus. We ended up ordering the following three pies: 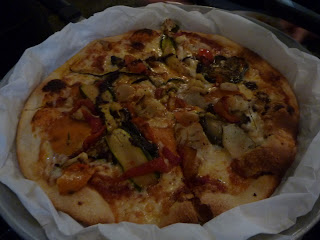 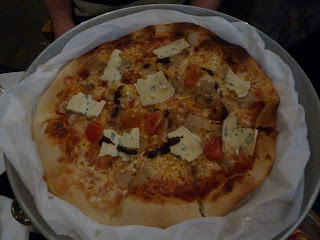 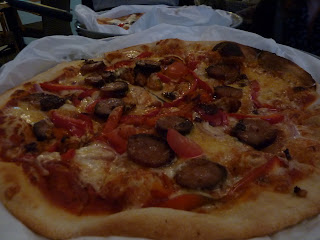 The pies are quite filling; our party of four wasn’t able to finish all three of them. Although I’m not a huge fan of blue cheese, I think that my favorite pie was the Jerusalem artichoke and Bavarian Blue Cheese. It was an interesting combination and Israel is known for having particularly tasty artichokes. The crust was a bit crunchier than I typically prefer.

Although Gusto will not change you pizza eating life, it is a nice upscale restaurant where you can see and been seen. The best seats are out in front overlooking Rabin Square. Even though I was there in February, it was still warm enough to eat outside. The pies are creative and if you’re feeling adventurous, it’s hard to go wrong at Gusto.

Previous: Rooftop Pizza Party Recap: Thoughts On An NYC Culinary Experience
Next: New York Times: How Not To Make A Pizza