Posted by: I Dream Of Pizza in International, Israel, Reviews June 17, 2011

I recently returned from a trip to Israel (my ninth time there!) and was able to sample pizza from three very different places. In prior postings about pizza in Israel, I’ve broken down the type of pizza place you might visit there into three distinct groups: (1) traditional, old school pizza places, (2) modern slice …

Summary : One of the coolest pizza experiences imaginable. This hole-in-the-wall pizza spot in Jerusalem's Muslim Quarter features shakshuka-like pies prepared by the cigarette smoking Abu Ali from a preparation station in the floor.

9
I recently returned from a trip to Israel (my ninth time there!) and was able to sample pizza from three very different places. In prior postings about pizza in Israel, I’ve broken down the type of pizza place you might visit there into three distinct groups: (1) traditional, old school pizza places, (2) modern slice joints, and (3) upscale, artisinal pizza restaurants.

The traditional, old school “pizza” places might be found in the alleyways of the old city of Jerusalem where old men cook warm pita-like bread on ovens that look like they date back to the patriarchal days. Modern slice joints, on the other hand, are similar to what you might find on the street corners of New York City. They can be found in almost every town and city throughout Israel. And finally, a new breed of upscale, artisinal pizza joints are producing pies similar to what you might find at a fancy New York City pizza place. They are usually located in major cities like Tel Aviv and are just beginning to make their mark on the Israel pizza scene.

It just so happened that each of the three places I visited on this trip fell distinctly into a different one of these categories. The first, and most fascinating place I checked out is called Green Door Pizza Bakery. It has no address and once you’re able to find it, you’ll be greeted by a man standing in a hole in the floor making some of the most unique pizza you’ve ever tasted. It doesn’t get much more ancient than that. The place, by American standards, would not pass a health inspection. There are cats roaming around and the man producing the pies smokes a cigarette as he works. But it is this type of atmosphere that makes eating at Green Door Pizza Bakery so special. 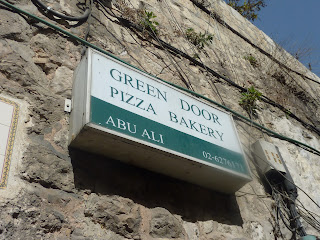 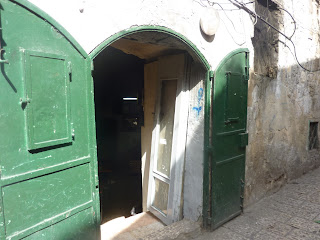 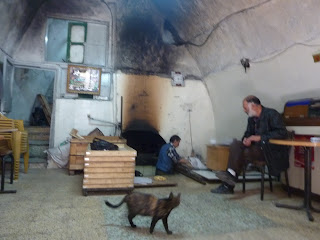 You might be wondering how I came across this place. I’d heard, over the years, about a pizza shop in the Muslim Quarter. Having no other information about it, I was able to piece together some blurbs from websites about how to get there, although it has never been written about extensively online as far as I can tell. There was also this shaky video on YouTube that I came across:

The man making the pies is Abu Ali. He speaks very little English, but just enough to be able to communicate with American tourists. When we entered the shop, we approached him down in his hole. He smiled and asked us, “meat or no meat?” My three friends and I opted to try pies without meat. Each pie is made individually with dough that has previously been prepared. The main toppings used on the pie are cheese and eggs, although there is also some sauce and spices added right before it goes into the oven. 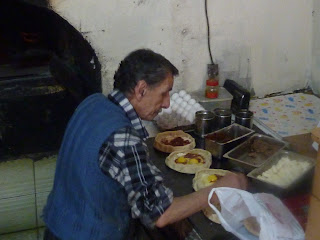 The result was a pizza that tasted like it had shakshuka on it. In case you’re not familiar, shakshuka (sometimes spelled shakshouka) is a Middle Eastern dish featuring eggs that are cooked in a sauce of tomatoes, peppers, onions, and spices. It is generally a dish which I find appetizing and it tasted just as good on pizza. As I worked my way through the pie, which is quite filling, I found myself enjoying the pizza more and more. It comes out of the oven very hot, and benefits from a few minutes of cooling. Each pie cost only about $7.00 American dollars (depending on what the conversion rate is). 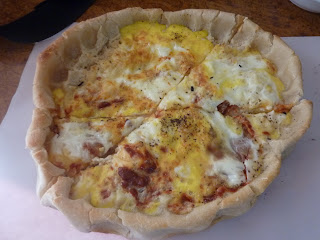 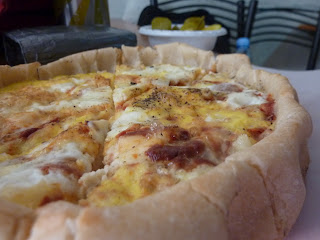 It should be noted that had I been eating the pizza in a Middle Eastern restaurant in New York City, I might not have found it particularly noteworthy. But as I dug my mouth into this pie, I thought about all of the history which has taken place in the alleyways of Jerusalem surrounding me. And here, in the 21st century, there is a man who opened a pizza place at which he stands in a hole in the ground and churns out pies from an oven that is perhaps centuries older than him. What an experience.

So by now you might be wondering how to find a pizza place without an address? I’ll do my best to get you there. A street sign outside the front door indicates that it’s located along the Sheikh Raihan Ascent. If you bring up a map of the Muslim Quarter, you’ll see that after entering through the Damascus gate, veer to the left when you reach the first fork to get to the Sheikh Raihan Ascent. From there the pizza place should be visible. I, however, had the difficult task of navigating my way there from the Jewish Quarter. From The Cardo area, take Beit Habad for about a third of a mile (a 10-15 minute walk through the crowded Muslim market) until you reach the area leading to the Damascus Gate. Look to your right and you should see signs for Green Door Pizza Bakery.

Enter through the front door, walk down a few steps, and head over to the hole in the ground. In it, you’ll find Abu Ali… eagerly waiting to make some pizza for you. 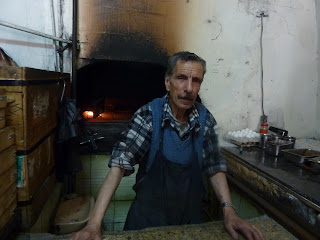 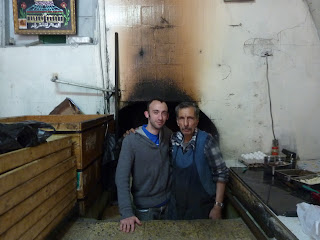