As I wrote about last week, over the summer my girlfriend and I took a roadtrip from Portland, OR to Los Angeles, CA. After an excellent experience at Ken’s Artisan Pizza on my first night in Portland, I had particularly high expectations for dinner at Apizza Schools (4741 SE Hawthorne Blvd). After all, Slice’s pizza …

Summary : One of Portland's most notable pizza places is worth checking out. They only serve full pies, which are more than filling for two people.

As I wrote about last week, over the summer my girlfriend and I took a roadtrip from Portland, OR to Los Angeles, CA. After an excellent experience at Ken’s Artisan Pizza on my first night in Portland, I had particularly high expectations for dinner at Apizza Schools (4741 SE Hawthorne Blvd). After all, Slice’s pizza bracket lists it as one of the eight best pizza places in the entire country and Anthony Bourdain even paid a visit there a few years back. In fact, part of the restaurant was closed the evening I was there, as the crew of America’s Best Bites was filming clips for an upcoming episode. Apizza Scholls is Portland’s most famous pizza place… but was it also Portland’s best? 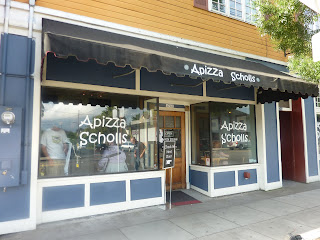 The simple answer is… no. I enjoyed the pizza — and my overall — experience at Ken’s Artisan Pizza better. That’s not to say that Apizza Scholls wasn’t great. But it didn’t meet my unrealistically high expectations. When we arrived at the restaurant around 6PM on a Tuesday evening, we were told it would be about a 45 minute wait. The host was also the bartender and a pseudo bus boy (wiping down tables), as the place seemed very understaffed on this particular evening. Empty tables were often left dirty for five minutes or more — a no-no when dozens of people are waiting to be seated. 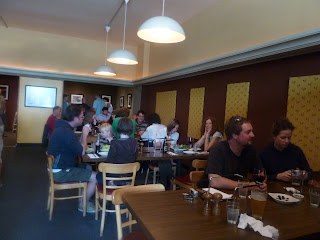 The place itself is awkward. For starters, it’s carpeted and the walls look like they’re straight out of a hotel lobby from the 1940s. The restaurant is two rooms (the main room has about six tables and a bar), but you can’t walk between the rooms. Thus, say you order a drink at the bar while waiting to be seated. If a table is available in the other room you have to exit the restaurant and walk over to a street entrance while the bartender brings your drinks around through the inside. Confused? I’ve never seen any set up like this. It would appear that this was due to an expansion at some point, but it would make sense to renovate the restaurant so patrons don’t have to exit the restaurant to get to their table.

I was most excited to see a drink on the menu at Apizza Scholls that I’ve recently fallen in love with. I’m a huge root beer fan and my favorite root beer is from Capt’n Eli’s in Portland, Maine (not to be confused with… Portland, Oregon). I’ve never seen Capt’n Eli’s root beer available in New York City and I actually have their root beer shipped to my apartment from Maine on a regular basis. I was impressed that this incredible drink found its way onto the menu at Apizza Scholls. Every restaurant should carry it.

When we were eventually seated, about 15 minutes after our expected wait time, the service drastically improved. We were told to get our order in before a large party that was seated a few minutes before us — a helpful tip from our waiter. The pies at Apizza Scholls are quite large; one is sufficient for two people. As we’d made a stop at Voodoo Doughnuts only a few hours beforehand, we struggled to finish our pie.

Pies run from $19-$25 and the nice thing is that you can get half of one topping and half of another. As such, we were essentially able to try two pies. We got half Margherita (tomato sauce, mozzarella, pecorino romano/grana padano, fresh garlic, extra virgin olive oil & fresh basil) and half Tre Colori (mozzarella, pecorino romano/grana padano, semi-dried tomato & walnut pesto, ricotta & jalapeño).

Although the latter half seemed to have potential, it fell short of the Margherita. In fact, our dining neighbors (some tables at the restaurant feature group seating) were frequent patrons and love the Margherita so much that they’ve never even tried anything else. If nothing else, the pie was filling. The crust was thick and reminded me a bit of the pizza I had last summer at Great Lake in Chicago. There was a lot of basil on the Margherita, which I liked, but the sauce overwhelmed the cheese. On the Tre Colori, I could barely taste the walnut pesto and the blend of cheeses didn’t combine to elicit the flavor I was hoping for. Overall, this is not necessarily the style of pizza I’d have for my last meal, but it was still satisfying. 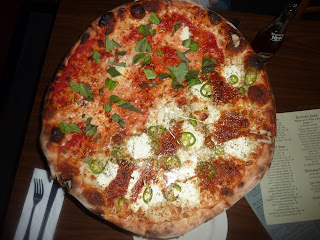 I’d love to return to Apizza Scholls and try some of the other pies they have on their menu. A dining experience there is best enjoyed with a large group. I’m willing to overlook some of the smaller mishaps (never judge a pizza place by its carpet, right?) and say that Apizza Scholls is worth a visit — even if it won’t change the way you think about pizza. It’s a significant trailblazer in the Portland pizza scene.

Plus, while you’re there you can always purchase one of these awesome shirts for yourself! 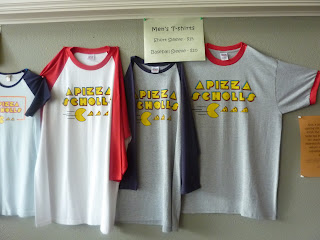