Posted by: I Dream Of Pizza in Germany, International, Reviews February 18, 2013

Recently, I spent three weeks traveling around Eastern Asia. When booking my transportation, I arranged for a 12 hour layover in Frankfurt to explore the city and, of course, try some pizza. In fact, upon landing at Frankfurt Airport, I immediately hopped on the train to Hauptbahnhof, Frankfurt’s main rail station (and the busiest in …

Summary : Exceeded expectations as far as what I might find in Germany pizza-wise. The place appears to be quite authentic and has a vast menu. Pies are a bit oily.

Recently, I spent three weeks traveling around Eastern Asia. When booking my transportation, I arranged for a 12 hour layover in Frankfurt to explore the city and, of course, try some pizza. In fact, upon landing at Frankfurt Airport, I immediately hopped on the train to Hauptbahnhof, Frankfurt’s main rail station (and the busiest in Europe). After a 20 minute walk north of the station, I arrived at Da Cimino (Adalbertstraße 29). The city was almost completely dead on my walk over and I was worried that Da Cimino would be closed, despite the hours of 11AM-1AM posted on its website. To my surprise, however, when I arrived at 11AM, dough was being stretched and a few customers were already chowing down on pizza. 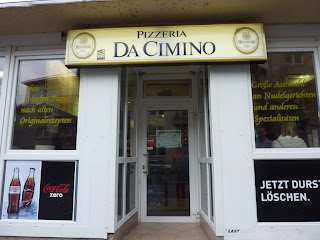 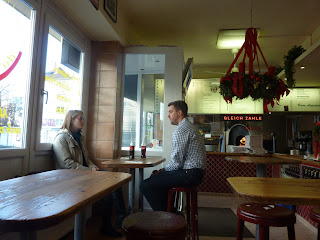 The first thing you’ll notice when entering is a massive, illuminated menu above the counter which boasts more than 130 Italian items — including 36 pizzas. The menu was not in English, but most topping items were intuitive (tomaten = tomatoes, schinken = chicken, champignons = mushrooms, and thunfisch = tuna fish). A few, however, were not (zwiebeln, for example, is apparently onions).  My friend and I kept it relatively simple and ordered one cheese pie and one pie with mushrooms (items #1 and #5). The place is decorated with futbol memorabilia and we took a seat while our pies were cooked. 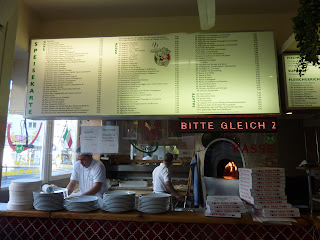 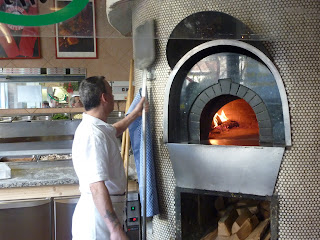 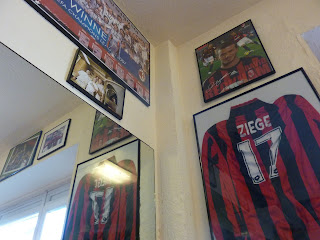 I enjoyed both pies although they were a bit on the oily side — even for someone like myself who enjoys oily pies. The taste and texture was actually slightly reminiscent of one of my favorite hometown pizza places in Maryland: Guiseppi’s Pizza. I liked the cheese and sauce, but the crust was a little floury and perhaps could have benefited from another 30 seconds in the oven. This was also reflected in the mushrooms which, although tasty, were slightly undercooked for my liking. The personal pies cost 4.50 Euros and 5.80 Euros, respectively, and a single pie will certainly fill you up.

Frankly, I was just happy that Da Cimino was open. And after a couple of airplane meals, you better believe I was going to like what I ate. But objectively, Da Cimino is a solid pizza place in a land of brats and sausages. Everything from the fresh dough to the wood fired oven were more authentic than I ever imagined I’d find in German and a venture over to Da Cimino will leave you full and satisfied. 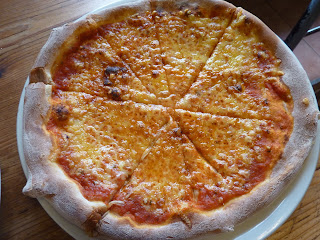 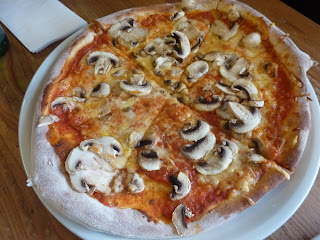 Previous: Habana Pizzas: This Is Pizza In Cuba
Next: First Look: Joe’s Pizza Is Back!