The first leg of my trip to Italy included meals at nine different pizza places over the course of a week. After that, I was off to Barcelona for a week of traveling and enjoying what were generally pizza-free days. On my way back to the United States, however, my travel itinerary landed me back …

Summary : This pizzeria is often overshadowed by Naples more famous pizzerias. But just a few blocks from the Central Train Station this "hidden gem" cranks out some of the city's finest pies.

The first leg of my trip to Italy included meals at nine different pizza places over the course of a week. After that, I was off to Barcelona for a week of traveling and enjoying what were generally pizza-free days. On my way back to the United States, however, my travel itinerary landed me back in Naples for a night which meant that I would have time to try one final pizza place before heading home. Scott (who had been traveling in Sicily) and I agreed to meet up at L’Europeo Di Mattozzi. Ed Levine (author of A Slice Of Heaven) wrote the following about the place — which was the primary motivation behind making this a must-try stop:

My favorite pizza in Naples, and my favorite all-around restaurant as well. The pizza melts in your mouth, and the pasta with peas and potatoes is the ultimate Italian comfort food.

When we arrived there around 7:30PM on a Monday night, however, the oven was not working and we were forced to come up with another plan. Luckily, we had asked the owner of the hostel where we were staying (Hostel Of The Sun) to join us for the meal, and he was quite familiar with the pizza scene in Naples. We followed him to one of his favorite places: Pizzeria Pellone (93, Via Nazionale, 081-553-8614).

Located just a few blocks from the Central Train Station, the restaurant was on neither one of our extensive lists. And considering how great it was, it’s a shame that it has not received more recognition (on the interwebs, at least). 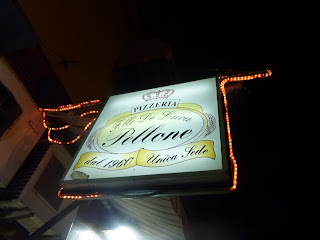 The 120-seat restaurant was filled with mostly locals when we arrived. Even during the more touristy season, I’d imagine most out-of-towners flock to more well known spots like Da Michele and Di Matteo. Consider Pizzeria Pellone a hidden gem that’s not really hidden. Our party of five grabbed a table in the back by the kitchen. I was excited to be eating with a large group, as it had generally been difficult to try more than two pies when it was just Scott and I dining together. 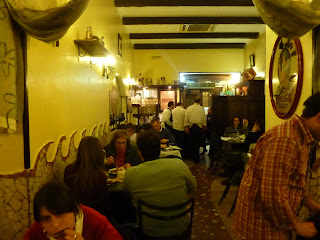 The Marghertia and Marinara were as good as they get. Soft and chewy… oozy and gooey… each and every bite melted in my mouth. The crust was charred perfectly and it was easy to work through the pie without it falling completely apart. The Marinara had a bit of a kick to it which was lacking at some other places. It’s nice when a Marinra pie contains some colors other than red, which this one certainly did. 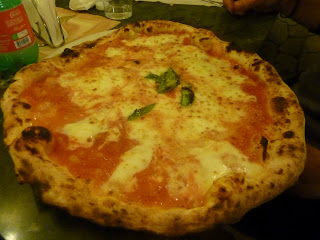 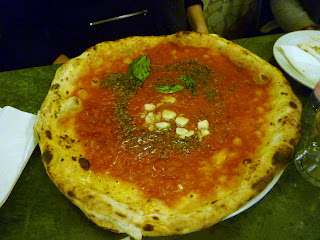 Despite the deliciousness of the first two pizzas, my favorite pie was the Primavera — the arugula and shaved parmesan were so flavorful. It was as tasty as any pizza I had during my trip and it makes me wonder if I would have found comparable pies at other places if I’d had the opportunity to delve deeper into their menus. 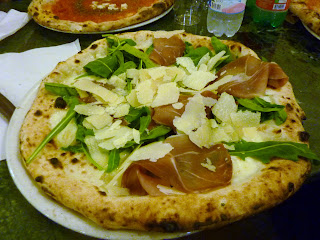 And finally, the Salsicce E Friarielli. You might be wondering what Friarielli translates to in English. It is actually a green vegetable that is found only in the Campangna region. I hadn’t heard of it until it appeared on the menu here, but if you’re looking to try a food that’s unique to the area… this is it! I can’t pinpoint any unique properties it had, but with a spinach-like texture and flavor, it was a nice complement to the sausage. 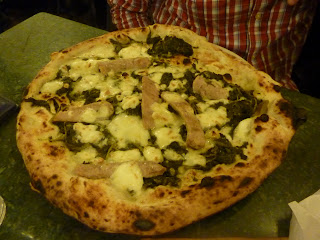 When I made my way back to the kitchen at Pizzeria Pellone to take some photos of the pizza makers at work, I was once again moved by the sense of pride that each exhibited. I’d spent time in nearly a dozen kitchens throughout my trip and the love and craftsmanship that goes into each and every pie is evident in the body language of the hard working folks behind the scenes. They often don’t speak English. But when they sense that we both share a similar interest and passion for pizza, they’re excited to welcome me into their kitchens, as if they were inviting me into their homes. As I snapped photos of what would be the final kitchen I visited on my trip to Italy, I thought about the thousands and thousands of pizzas that are made throughout the country each day. Many of the pizzerias I visited have survived world wars, economic crises, and social conflicts. But rain or shine… summer or winter… their ovens will be burning well into the night. There is no telling what the future may bring, but pizza in Italy appears to be as popular as ever — its inextricable power in full force. Although I was 4,000 miles from New York, as I sat back down to finish my final Neapolitan pizza, I couldn’t have felt more at home.

The above piece is the 13th article in a 13-part series about my pizza adventures in Italy (January 2011 – February 2011). You can access the other parts of the series here: