The Most Anticipated NYC Pizza Openings Of 2012

Last month I took a look back at some of the best pizza I ate in New York City in 2011. Now it’s time to look forward to a few notable openings this year. Although some people might think the New York City pizza market is over-saturated, there are a number notable spots that will be opening their doors in early 2012. I have extremely high expectations for all of these places. And here’s why:

In 2009, I stopped by this Neapolitan spot in Seattle’s Capital Hill district and loved the pies there (Via Tribunali: Stellar Pizza In Seattle, Washington). So it goes without saying that I was excited when an e-mail landed in my Inbox back in November from owner Elizabeth Werner announcing that they’d be opening a New York outpost on the Lower East Side.

Michelin star chef Michael White has made his mark on New York City with restaurants like Marea, Osteria Morini and Ai Fiori. In early 2012 he’ll be making his first foray into pizza with this East Village spot. Don’t expect traditional Neapolitan pies to be served. He recently told GrubStreet that the pizza would be “crispy, chewy, not too thick and not too thin.” Whatever the style is, I’m sure it will be delicious.

During my trip to Italy last year I ate a lot of good pizza. But there was one spot that absolutely blew my mind: Pizzeria Starita in Naples. In just a few weeks you won’t have to travel all the way to Italy to eat the incredible pies they serve. Owner and pizza maker Anotonia Starita is teaming up with Keste’s Roberto Caporuscio to open a pizzeria in Hell’s Kitchen. With such an all-star cast on board, anything less than spectacular selection of pies will be disapointing. 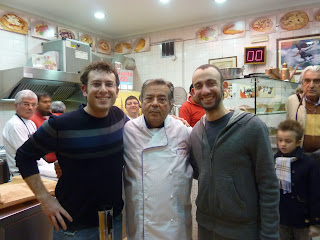 Scott Weiner, Antonio Starita, and me at Pizzeria Starita
Don Antonio Nicolletta Via Tribunali 2012-01-12
I Dream Of Pizza

Previous: Five Best Pizza Places Outside Of NYC In 2011
Next: A List Of New Reviews In 2011