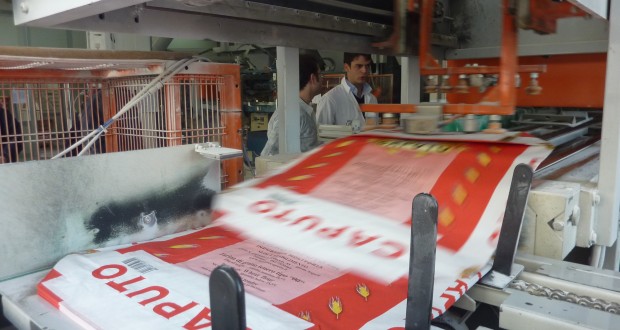 Posted by: I Dream Of Pizza in International, Italy, Reviews March 18, 2011

After hitting up Da Michele and Pizzeria Brandi during day one in Naples, our palates were salivating for some more pizza when we woke up on Thursday. But first we decided to pay an important visit to an institution without which much of the world’s best pizza might taste drastically different. For nearly a century, Caputo has been producing what is widely considered to be the most optimal flour for making pizza dough. In fact, their line of high-quality custom blends of flour can be found in restaurants, bakeries, and other food establishments throughout Italy and beyond.

Although not open to the general public, the folks at the Caputo headquarters and flour mill (55, Corso San Giovanni a Teduccio) invited Scott and I by for an inside peek at the process behind producing their renowned flour blends. It was one of the highlights of my trip and provided me insight into a world about which I had almost no knowledge. After a 15 minute ride on the 256 bus coming from the Central Naples Train Station in Piazza Garibaldi, we arrived at the factory.

The production process is quite intensive and I won’t detail every step, but I would like to share some general tips about the flour making process and what enables Caputo to stand out from its competitors. These days — more than ever before — a greater emphasis is being placed on the quality of food products and where they come from. Along with that, comes greater competition. But the Caputo brand has remained strong, as it has been for decades, while other companies are fighting for even a small portion of Caputo’s market. Below, you’ll find out why.

We started off our tour in what I can only describe as a grain lab. You see — each customized Caputo flour blend (there are about a dozen of them) contains a mixture of wheat grains from 8-10 different countries. So Caputo’s pizza flour, for example, might contain a mixture of grains from the United States, Germany, Croatia, Italy, etc. Caputo’s pastry flour would contain a different mixture. But it’s not quite that simple…

Because the harvests in the countries that make up these blends can vary, the blends themselves can change too. Thus, is important to closely monitor which grains are going into which blends. If it rains a lot in a certain country during its harvest, for example, you’ll get a different type of grain that during a drier harvest. In turn, the ratio of the grains used from each country might change. Or, quite often, grains from different countries are swapped in and out of blends. 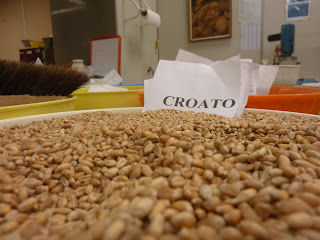 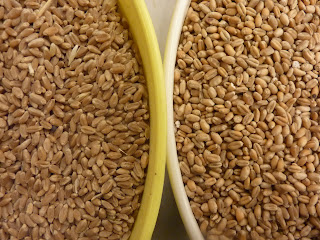 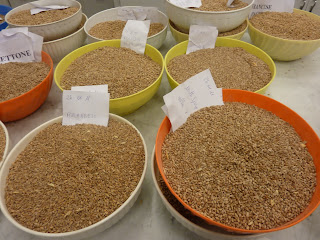 So how do the different grains from all these countries get to Caputo in the first place? Well when a shipment of grains arrive at the harbor, someone from the company will go and take a sample. The grains will be analyzed and if it meets the company’s needs and standards, they’ll make a purchase. The grains are then delivered to the flour mill, where they are sucked up by the large machine below. It’s at that point when the actual flour making process begins. 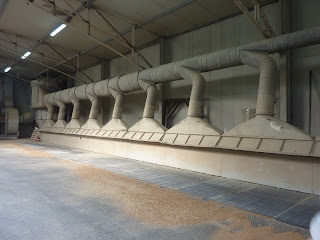 This is considered to be a slow milling process (1-2 hours). Typically, grain goes through this process only about five times (maximizing the amount of flour production), but the method used at Caputo ensures that the company is producing the finest flour on the market. It’s about quality, not quantity. 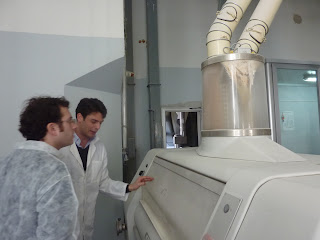 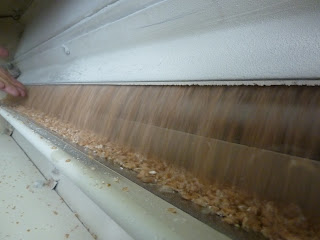 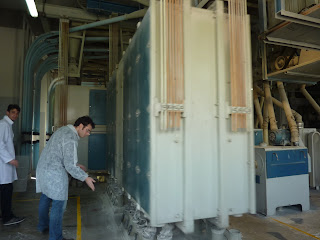 The final step of the vertical production process takes place on the first floor where the flour is packaged. Each blend has a different color label (some pizzerias have even been known to mix different blends). After that, it’s onto a truck and off to a pizza place near you! 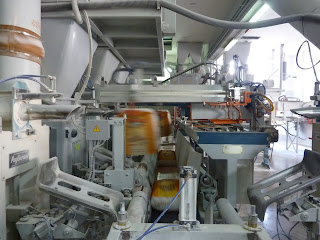 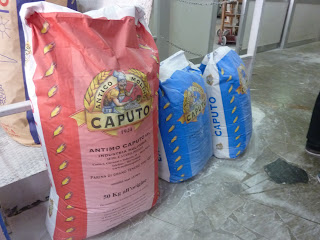 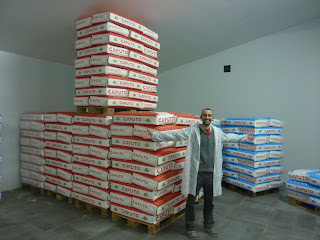 Our tour ended back in the “grain lab,” but the space is actually used for more than just analyzing grains. Of particular interest to me was a machine that tests the elasticity of dough made using different blends of Caputo flour. You might be wondering what makes a dough better for pizza as opposed to, say, pastries. Well a lot of it has to do with the strength of the dough (determined by the different grains that go into it). A pizza maker might be wondering the extent to which dough can be stretched before it breaks. It’s in this lab, where those types of tests are run. 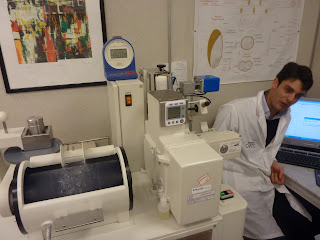 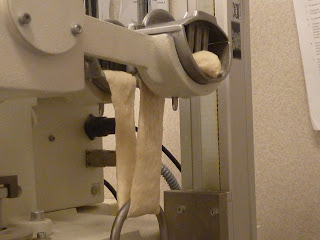 Even though Caputo has been around since 1924, they’re still producing new products. The lab gives them a space to test out these products. An example of this is a current blend they’re soon hoping to begin exporting to Brazil. Because many Brazilians suffer from iron deficiency, the government has regulations that require all flour sold in the country to contain a certain amount of iron. Thus, Caputo is currently experimenting with the best way to incorporate iron into their flour.

It should be noted that when Caputo was founded, they only made one blend of flour with local grains (in a red bag). But when the Marshall Plan was implemented following World War II, they began to import grain from the United States which was higher in protein. Currently, most of the grain they import from the United States is from North Dakota and Minnesota — close to the Canadian border. The pizza blend — which can be found in Caputo’s blue bags — actually has a little less protein in it than the standard blend. When the pizza blend became available, some pizzerias switched over. Others, stayed loyal to the red bags. And some mixed the two together. It’s clear that sales and marketing are strong forces behind the development of these customized blends. Whether or not you use a blend that’s best suited for your needs, you can be sure you’ll be using high quality flour if it has the Caputo label on it.

What was perhaps the most memorable part of my visit to the Caputo headquarters had nothing to do with the flour production process, but rather the attention and generosity that was extended to both Scott and myself. The folks at Caputo went out of their way to accommodate us. They spent a good part of their day showing us around and even drove us to a nearby pizza place for lunch (more on that in the next posting). It’s a family run business and while we were there, we felt like part of the Caputo family.

The above piece is the 4th article in a 13-part series about my pizza adventures in Italy (January 2011 – February 2011). You can access the other parts of the series here: