Earlier this year, Manhattan’s first ever pizza cone shop opened (K! Pizzacone: “Pizza” On The Go) and I’ve previously written about less than stellar pizza cones out in Queens (Cone Pizza In Queens – Innovative But “Rancid”).

Well today, I was sent a link to a recipe for pizza cups from the blog My Kitchen Snippets. The author uses high quality cheeses and loves the “gooey and oozy brie when they just come out of the oven.” Judging by the photos, these actually look appetizing. Not that K! Pizzacone isn’t… but I wonder how a pizza cone/cup would taste with high quality ingredients.

For those who haven’t shelled out for a pizza stone or think that making pizza at home is too complicated… go ahead and give these a try. They’re cooked in a muffin pan in the oven.

You can find the full recipe here. 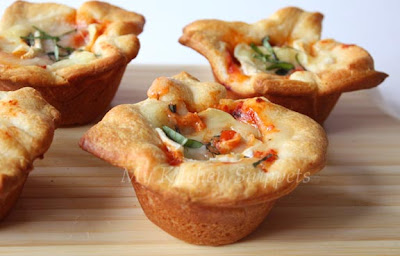