The NYC Pizza Run… In Japanese

The 2012 NYC Pizza Run is just 5 days away! And while we’ve been blessed with much coverage from the media over the past few years, today we celebrate a first — an article in Japanese from online news site Keizai Shimbun.

Thanks to Google translate, I have a rough idea of what it means. Sample translation:

The race to be the third time this year started in the year 2010, which eat the pizza that is prepared at three checkpoints, to finish the course of about 3.6 km. To New York to see people eating pizza while walking did devise a marathon unique perfect, Jason Fairman that boasted the likes pizza itself, also manages the pizza blog “I Dream of Pizza”.

I’m sure it reads a bit more smoothly in Japanese. Give it a shot yourself here. 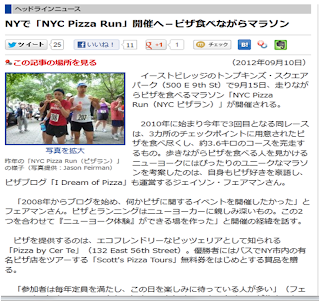