I’m excited to announce that the third annual NYC Pizza Run will be taking place in Tompkins Square Park on Saturday, September 15th. Participants will once again aim to complete a 2.25 mile run while stopping to eat three slices of pizza at checkpoints throughout the course.

Tickets went on sale earlier this month and as of right now there are just 17 spots remaining. Click here to sign up today!

Your registration fee includes: an official NYC Pizza Run t-shirt, race bib, three slices of pizza (from Pizza By Cer Té) to be consumed during the race, a pizza gift bag to be distributed following the race, and a free drink at the afterparty (at Common Ground). We also have some great prizes lined up for the top finishers

A portion of the proceeds will once again benefit the Juvenile Diabetes Research Foundation International (JDRF).

I hope to see you there! 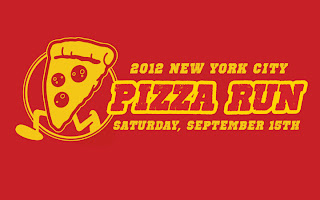