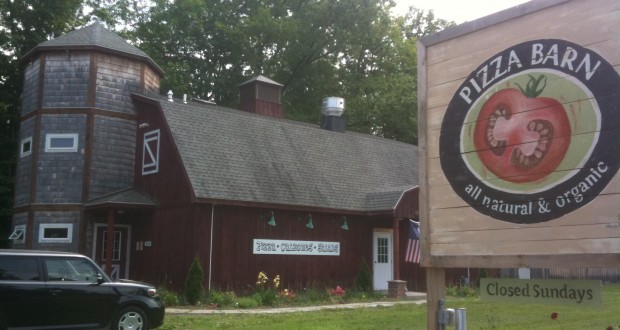 PLEASE NOTE THAT THIS ESTABLISHMENT IS PERMANENTLY CLOSED Earlier this summer, I took my girlfriend to upstate New York for our one year anniversary. Although she seems to enjoy pizza, I figured I’d spare her from venturing to any pizza places with me on this particular outing. After all, it was our anniversary! But that …

Summary : I stumbled upon this pizzeria in a barn while on an adventure in upstate New York. I couldn't have been more happy I did. One of the more unique pizza places I've been, it's one part eco friendly and one part kid friendly.

Earlier this summer, I took my girlfriend to upstate New York for our one year anniversary. Although she seems to enjoy pizza, I figured I’d spare her from venturing to any pizza places with me on this particular outing. After all, it was our anniversary!

But that all changed as I was driving on Route 209 through a town called Accord. To give you an idea of Accord’s size, according to Wikipedia the population there is 622. In other words… we were in the middle of nowhere. Which is why I couldn’t contain myself when we sped past a barn with a sign for pizza out front. This I had to check out. 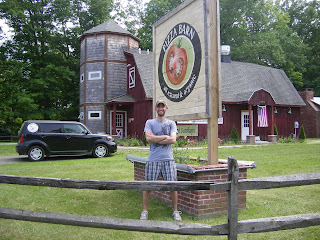 Although we weren’t even certain that Pizza Barn (5125 Route 209) was open — or even in business — when we opened the front door and stepped foot inside, it was clear we’d found a pizza mecca. Every aspect about Pizza Barn blew my mind. For starters, it’s housed in a refurbished barn. The outside structure fits the setting of its location in Accord, yet the inside maintains a modern and rustic ambiance. It’s clean, but it still feels like you’re out in nature. 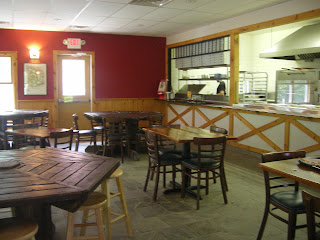 This brings us to the views. Only hours before stumbling upon Pizza Barn, I’d been enjoying the New York City skyline. Look out the windows of Pizza Barn, however, and you’ll find a tranquil body of water and trees. I can’t think of a more peaceful setting for a slice of pizza. 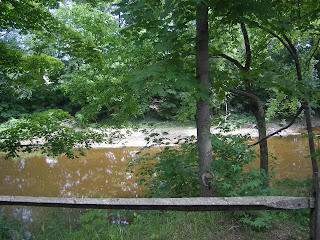 Next, there’s the back story. The place was started by a husband and wife — Tanya and Michael — who were the only two employees working. It’s a family owned, mom and pop pizza place. I knew that a lot of thought was put into the structure and layout of the restaurant. But I soon learned that just as much effort was put into the design and branding of it. Yes — Pizza Barn has a logo (a mascot, if you will) who is completely awesome. It’s the type of place I would have wanted to have my birthday party at as a child. And come to think of it… I’d like to have my birthday party there even as an adult. 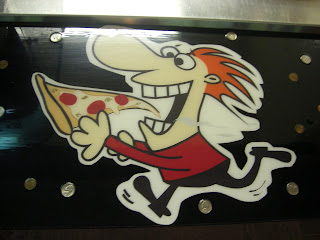 All of these elements made me excited to try the pizza. At the end of the day, a food establishment will be judged by what it serves. Pizza Barn was doing everything right. But I knew that if they couldn’t produce a good pie, all would be forgotten. Before I get to the pizza, it’s worth noting that Pizza Barn is an organic pizza place. And that word isn’t taken lightly there. Their motto includes the following:

Our dough is 100% organic whole grain. Our ingredients are always fresh and prepared daily. We don’t use anything with added hormones, pesticides, or harmful chemicals.  Everything we use and produce is healthy – the way nature intended.

You’d expect to see this posted on the wall of a pizzeria in Bushwick. Not in Accord, NY. They make a point of noting that they’ve removed all the “bleach, bromate, added hormones, antibotics, nitrates, trans fats, high fructose corn syrup, artificial flavors, dyes, and preservatives” from all their recipes. Believe it or not, this even translate to their sodas. You won’t find Coke or Dr. Pepper there. Only a soda machine filled with a variety of beverages lacking additives. 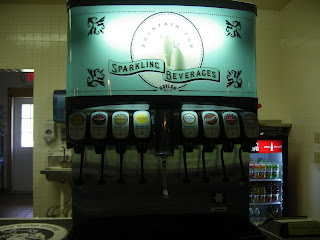 The pizza itself was tasty and innovative. There are some 20 pies on the menu and we opted for the following three slices: a Classic slice, a Roasted Goat slice (roasted red peppers, mushrooms, and artichoke hearts topped with crumbled goat cheese), and a Gorgonzola slice (sliced tomatoes, bell peppers, dried cranberries, and caramelized walnuts topped with crumbled Gorgonzola cheese).

I’ve never had dried cranberries on a slice before, but they served as a pleasant complement to the vegetables on the Gorgonzola slice. The Roasted Goat slice was just as delectable. The vegetables were fresh and flavorful. You can tell a lot of thought was put into every pie. The Classic pie was comparable to what you might find on an NYC street corner — a compliment for a spot 100 miles north of New York City. 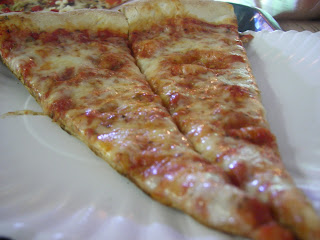 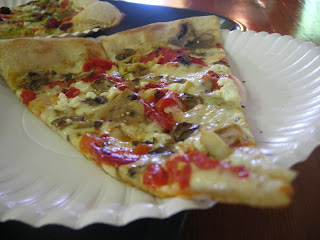 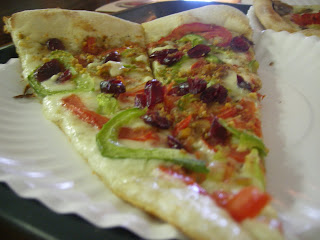 Although I had no plans of eating pizza during my trip upstate, this ended up being one of the highlights of my day. Next time I’m headed upstate, you can be sure I’ll be stopping back at Pizza Barn to try some more of their pizza. And to my girlfriend — I’m sorry, but when pizza calls… it’s time to eat! Especially when that pizza is being served out of a refurbished barn!

Previous: Saraghina: Flying Under The Radar In Bed-Stuy
Next: $10 Neapolitan Pizza’s At Williamsburg’s Forcella