I Dream Of Pizza Featured On Slice!

I noticed a lot of new traffic coming to I DREAM OF PIZZA over the past few days and came to realize that a lot our new visitors saw us on Slice over the weekend (New Links For Pizza Fiends).

I just wanted to welcome everyone who is visiting the site for the first time. Last year, I had an epiphany that I should combine my love of New York and my passion for pizza into blog… and here we are!

I’ve been doing my best to update the site everyday. It amazes me how much pizza related content there is in New York… this week alone, three new highly anticipated pizza places opened in the city — Tonda, Keste Pizza & Vino, and Noi Due.

Check back often and enjoy our tidbits, reviews, news bites, and all else pizza! 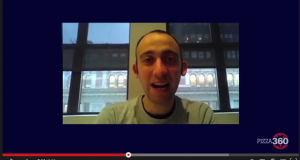 I Dream Of Pizza Featured on Pizza TV