Posted by: I Dream Of Pizza in Miscellaneous January 18, 2010

Stars!! Are they just like us? Maybe. Maybe not. But last month US Weekly published a feature of stars delivering pizza to their fans.

First we learn that Lady Gaga (as a former NYUer — she should know good pizza!) sent $1,000 worth of pies to fans waiting in line for her autograph in L.A., although no pizza photos appear.

Taylor Swift was captured delivering Domino’s to fans waiting for her autograph in London. C’mon, Taylor. You’re telling me there is no better pizza in London?

And finally, Anne Hathaway made headlines in NYC this summer when she delivered pizza to those waiting in line for tickets to Shakespeare In The Park. At least she opted for Ray’s Pizza over a chain. Although take it from me, Anne… there’s better pizza in the city! But when you’re waiting outside at 3AM… well, just about any pizza would taste good then. 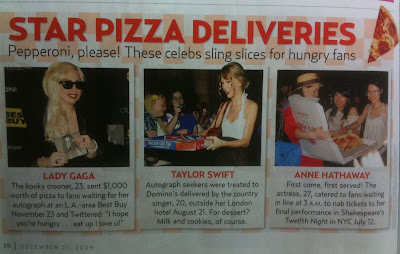 2010-01-18
I Dream Of Pizza
Previous: Pizza At Accademia Di Vino Featured On NBC
Next: 40 Gut-Busting Restaurant Challenges for Free Food