Last week, I went to an excellent South American inspired wine and specialty pizza tasting event at Pasita in the West Village. Hosted by Stefani Jackenthal (NTS Wine Tasting), attendees had the chance to taste seven different wines which were paired with four pizzas.

I don’t know much about wines (ummm, white please), but each one I tasted was excellent. I have a general theory that when drinking wine or beer each one becomes less distinguishable as the evening progresses, but oddly enough I enjoyed the last wine I had the best — a 10 year old HMB Old Reserve Malmsey from Madeira, Portugal. It was a dessert wine that featured “luscious notes of candied apricot, honey, cinnamon and cumin.” It was smooth on the palate and as enjoyable as any wine I’ve had. 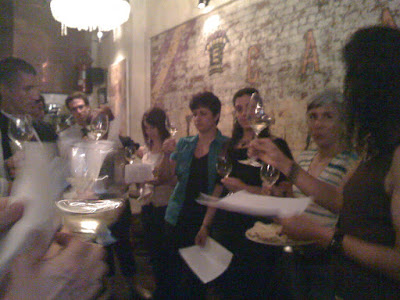 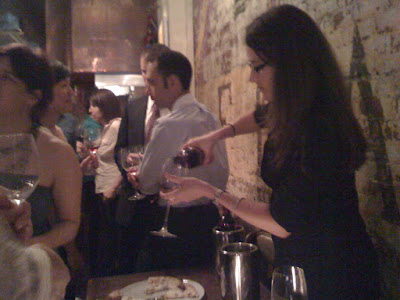 Not to be outdone by the excellent selection of wines, there were some equally satisfying pizzas. For starters there was a Manchego and Verde y Blanco Pizza with basil, pesto, mozzarella, parmesan & tomatoes. Apparently this was a big hit at the previous tasting and was brought back by popular demand. It was a solid pesto pizza, although the taste of the fresh mozzarella gets lost among the other ingredients. It paired with a Blanco Nieva Verdejo 2007 from Rueda, Spain. 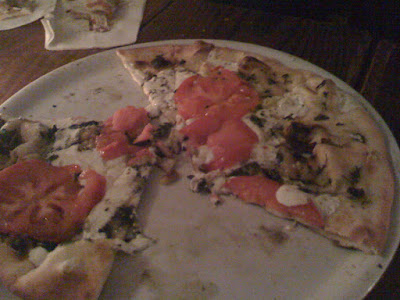 Next up was my favorite pie of the evening (although the photo doesn’t do it justice at all) — a Queso Valdeon Pizza with valdeon blue, mozzarella, nata, parmesan & goat cheese. It was essentially the equivalent of a four-cheese pie. The best part about this pie was that it came with a side of honey, which when poured on the pizza, made it absolutely delicious. I’d never thought to pair honey with pizza before, but perhaps I’ll have to carry a packet around with me from now on. The combination makes so much sense (unlike the infamous syrup and pasta combo from Elf). This pizza paired with a Esporao Rose 2007 from Alentejo Portugal. 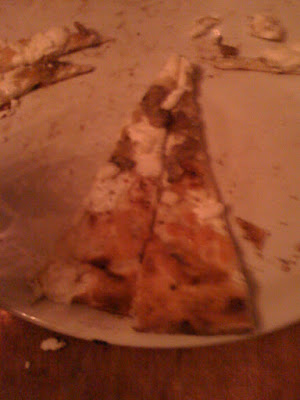 Another great pie was the Champon Pizza with roasted mushroom, artichoke hearts, caramelized onion, mozzarella, ricotta salata, and extra virgin olive oil. A lot of places have been making pies with similar ingredients, like San Marzano’s Bianca pie and Co’s Flambe pie. Pasita’s doesn’t match up to either of these, but it was still quite delicious. It paired with a Carrau Tannat Reserva 2006 from Las Violetas, Uruguay and a Pago de Valdoneje Mencia 2007 from Bierzo, Spain. The final pie of the evening was a Vieja Pizza with shredded beef, caramelized onion, manchego & red pepper. At this point I was full and tipsy, but I thought the three vegetarian pies outshined the meat pie. It paired with a Sur Bonarda Reserva 2005 from Mendoza, Argentina. 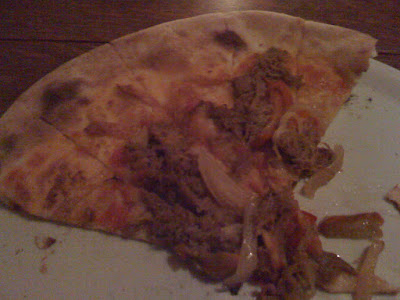 Overall, I learned a lot about wine… a little bit about pizza… and had an all around enjoyable evening. In addition to great food and drinks, the tasting was packed with a variety of fascinating New Yorkers — the best company you’d want to enjoy these treats with.

For anyone who likes both wine and pizza, there’s no better way to combine these interests. Keep your eyes out for upcoming events and maybe I’ll run into you there!

2009-06-22
I Dream Of Pizza
Previous: Hungry For Some Clam Pie?
Next: Another New E. Village Pizza Place