WHAT'S NEW?
Home / Uncategorized / So Long To Breaking Bad, One Of TV’s Most Pizza Friendly Shows So Long To Breaking Bad, One Of TV’s Most Pizza Friendly Shows

Posted by: I Dream Of Pizza in Uncategorized September 24, 2013

This Sunday marks the end of what I believe to be one of televisions greatest shows: Breaking Bad. Over the past few seasons, the show has invoked more heated discussions than I can count. Some issues are easy to take sides on. Should we feel sympathetic for Walt? Mourn the loss of Mike? But one thing that cannot be debated is the fact that Breaking Bad has been one of the more pizza friendly television shows… ever. And it’s most famous pizza scene — Walt throwing a pie on the roof — occurred with just a single take.

I had the opportunity to visit Albuquerque with some friends last year and much of our time there was spent driving around to all of the Breaking Bad landmarks in town: Pollos Hermanos (which is actually a fast food restaurant called Twisters), The Crossroads Motel (where the show’s most famous prostitute spends her time) and, of course, ground zero itself , the White residence. Although the plan was simply to snap a photo or two, we ended up meeting the real life woman who lives there — Fran, a native New Yorker who now lives in one of television’s most famous houses and has become a local celebrity herself. While we were talking to Fran, it occurred to me that I had to seize the moment and recreate Walt’s famous pizza scene. Without pizza, or even a box on hand, I had to improvise. I think that the result, with a little help from Photoshop, is a valiant effort, although my form is not quite up to that of Walt.

Both Walt and Jesse have had various other interactions with pizza throughout the show, a couple of images which I’ve included below. Photo credit for the Albuquerque photo goes to my friend David Lerman. 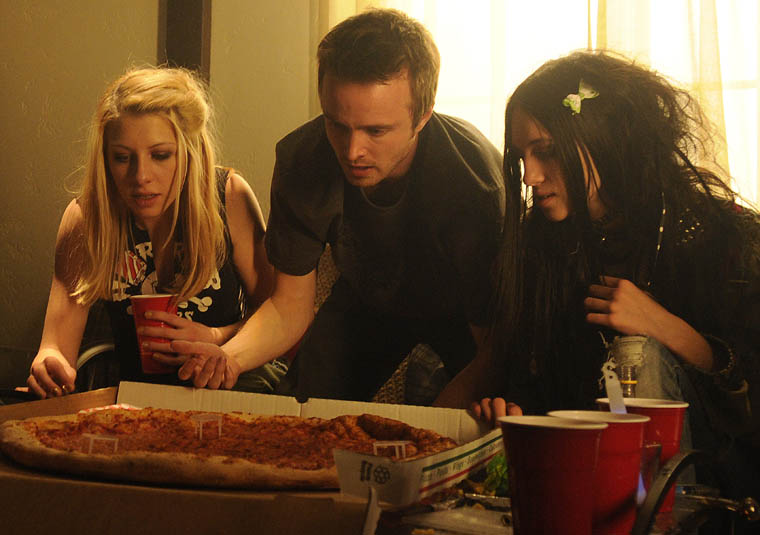 2013-09-24
I Dream Of Pizza
Previous: Nice Slice: Creative Pizza & Funky Art In Providence, RI
Next: A Case Study Of Jack Dorsey And His Pizza Love Affair Celebrate IDreamOfPizza’s 10 Year Anniversary With Me “Pizza” In A Taipei Night Market